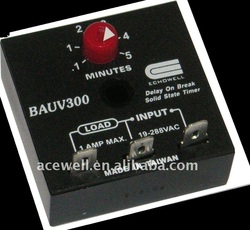 Time-Delay Relay
Relays are switches that are controlled by a circuit. Relays, in essence, send messages that tell something to start. When a car is started, the ignition only indirectly interacts with the battery of the car because a relay is sending the signal that tells the car to start. One of the reasons relays are necessary electronic parts for electrical devices is because they require less power to be used than many of the parts they're connected to. For instance, if a car battery were directly connected to the car's ignition, it would require a huge amount of electrical power and wiring to get the car started. With a relay, a much smaller amount of power is needed because it's merely a messenger, a go-between, from the car's ignition to its battery. This not only saves energy, but it is a safer means to starting the car than having all that wiring and heavy electrical power usage. Most electricians would call the manner in which a time-delay relay works as a kind of shock-absorber mechanism because the electric parts do not allow the time-delay relay to power up immediately. Rather, it starts up slowly, moving to full power over a period of time. This uses much less energy and it is safer for use. A time-delay relay is an extremely useful tool in very large, industrial-type equipment that would take a huge amount of energy if they started up immediately, rather than slowly as with this type of relay. In addition, if more than one time-delay relay is used in equipment, the delay will allow each electrical part to work at a different time.

Another application of time-delay relays is in the use of many of today's lamps that turn themselves on and off at specified times. Christmas lights and traffic signals are excellent examples of time-delay or time-release relays being used to switch lights either on and off or to turn signals from one position to another. In these types of applications, more than one time-delay relay is necessary in order to give lights uniform frequency and measure time for the desired light application. Another useful operation of time-delay relays is when used for safety reasons. For instance, in furnaces and furnace fans, the furnace's combustion chamber must be in use before the furnace is lighted in order for the fan to blow away fumes that can explode the furnace if a time delay did not prevent it. Time-delay relays are used in this instance in order to allow ventilation of the combustion chamber to avoid gaseous vapors or explosion. Motors that must begin slowly are another example of time-delay relays. These relays are used in motors that must start slowly in order to be activated slowly and use much less power than if the machine is started up all at once. Industrial machinery often must be started up slowly with time-delay relays because, without them, industrial machines would generate an enormous amount of power if started up all at once. This would not only use up a huge amount of power every time they must be started, but it could cause dangerous conditions because of the amount of current being used.