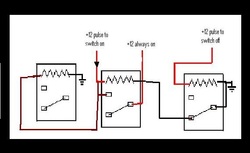 Latching Relay
A latching relay is an electromechanical switch. Latching relays are electronic parts that are used to control large flow of electrical current with smaller flow of current. Relays are typically used when small continuous electrical currents must be used. A latching relay, however, is used to control large currents with smaller ones, using a pulse to move the switch that then stays in position, and this reduces the power requirement slightly.

Latching relays have a small metal strip that, in essence, revolves between two terminals. Solenoids, or small coils of wire, can be found on either side of a magnetized switch that has one input and two outputs at these terminals. The switch can be used to toggle one circuit on and off, or it can be used to switch power between two circuits. It's the coils that control the relay action. When an electrical flow goes into the coils, that current generates a magnetic field which turns off. The magnetic strip between the two coils is also exposed to the magnetic field, so that when the circuit causes a pulse of electrical current through these coils, it then pushes the switch mechanism from side to side. The metal strip remains in that position until it receives another magnetic pulse, but this time in the opposite direction. This action will push the switch back to the other terminal. This type of relay remains in the last position it was in when the current was removed.

Latching relays are 'bi-stable,' meaning they have two relaxed states. (These are also known as 'stay' relays.) When an electrical flow is turned off, the latching relay remains in the last state it was in. Latching relay is really a generic term that is used to describe the type of relay that maintains its position after the power is removed. The reason latching relays are used is because they allow control of a circuit by providing a single pulse to a relay control circuit. They are also used when it is necessary to have a relay that will maintain its contact position during power interruptions, when power must be conserved. There are many uses in today's electric devices for latching relays. These include industrial or commercial machines, such as car wash equipment that utilizes dryers and pumps. HVAC and refrigeration, anti-condensation equipment, industrial cleaning equipment are all excellent examples of equipment that utilizes latching relays. Commercial coffee machines and commercial cooking equipment also use latching relays.

There are three major types of latching relays, including mechanical, impulse sequencing, and magnetic. Mechanical latching relays use locking mechanisms to hold contacts in the last position until they receive information to change. This typically happens by energizing a second coil. Contacts then will remain locked in that position until the opposing coil has received energy. Impulse sequencing relays transfer contacts with each pulse. Typically, impulse relays are made up of a magnetic latch relay and a solid state circuit that will determine which position the relay is in when power is applied, and then the opposite coil will be energized. The contacts will hold this position when the power is removed, and when the coils again receive energy, the cycle will start again. A magnetic latching relay typically requires one pulse of coil power to move contacts in one direction, and then requires another pulse that is redirected to move the contacts back in the other direction. These types of relays can have either one or two coils. In a device that has only a single coil, the relay will move in one direction when an application of power occurs with one polarity. It will then reset when reversing the polarity. In a device with dual coils, when the polarized current is applied to a coil that is reset, the contacts will progress.