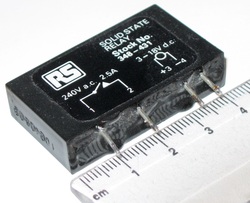 Solid State Relays
There are several different types of relays that can be used in electrical equipment, one such relay is the Solid State Relay or the SSR. The solid state relay is used as an on/off controller. Just like other types of relay switches, the SSR uses a small signal that actually controls a much larger load. The SSR consists of several components. It has a control signal (a sensor that responds to an input), an electronic switch that switches the power to the main circuitry and a coupling mechanism of some sort. The coupling mechanism allows the control signal to activate the switch without using any mechanical components, only electrical ones. The solid state relay can be designed to use with either AC or DC currents. This type of relay basically serves the same primary function as the electromechanical relay, except that it contains no moving parts which can be advantageous in many cases.

Components of a SSR

An SSR is comprised of different kinds of semiconductor materials. This includes transistors and thyristors. The SSR will have a current rating that can be as small as a micro amp which is used for low power instances; or they can have a current rating that is hundreds of amps and used for situations that require high power. SSRs have a very fast switching speed which can range from 1 to 100 nanoseconds. One advantage to using an SSR is that they are not subjected to common contact wear. But they do have the disadvantage of being very susceptible to being damaged by overloads. They also are very limited on the switch arrangements (SPST), and there is a need for a very fine tuning since they operate with very high resistance.

SSRs are classified by their particular input circuit and this is directly related to the output they achieve. There are three basic categories of SSRs that electricians recognize: Reed Relay Coupled, Transformer Coupled, and Photo Coupled. The Reed Relay Coupled SSR has a control signal applied directly to the coil of a reed relay. When the reed switch closes it activates the circuitry which will trigger the thyristor switch. The Transformer Couple SSR receives the input signal either through a DC-AC converter or receives is directly if the current is AC. The AC current is sent to a very low powered transformer which results in triggering the thyristor switch. The exact input-output configuration in this type of SSR will depend on how the transformer is designed. The Photo Coupled SSR applies the control signal to either a light source or an infrared source. Then the photo-sensitive semi conductor detects the radiation and switches the load. The beam of light is the only “coupling path” that runs between the input and output in this type of SSR.

An SSR is much faster than an electromechanical relay which depends on the time necessary to switch an LED off or on. The SSR has a much longer lifetime expectancy over other options especially since there are no moving parts to wear out and there are no contacts on which carbon can build up. Another advantage is that the output resistance will always remain constant no matter how much the relays are used. This is important because it means that there is a very clean operation; one that remains bounce-less. There is also no sparking which allows for the SSR to be used in environments which are explosive or combustible. The SSR does not generate any type of spark when engaged in switching. The SSR is also a type of relay which offers a completely silent operation which is preferable. If the user wants to use the same casing for an SSR and a mechanical relay to make interchangeability easier they can, but the SSR is actually much smaller than the mechanical relay which has similar specifications. One other advantage of the SSR is that it is not nearly as sensitive to some of the environmental factors that can be present during storage or operation. This means that the Solid State Relay is not susceptible to mechanical shock, humidity, vibration or external magnetic fields that might be present.