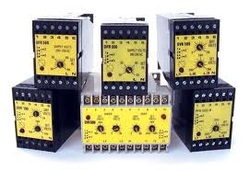 Protection Relays
A protection relay is typically used to solve an electrical problem of some sort. By comparison they work similarly to how a thermostat solves the problem of automatically controlling the temperature of the air using a furnace or air conditioner. A protection relay is basically used to detect some type of problem. The best case scenario is if it can be used during the first stages. Then it can either eliminate any damage that could happen to the equipment or prevent a person from getting harmed. In some cases, damage may not be totally eliminated, or may have already occurred, but it can at least be significantly reduced.

How does an electrical problem develop?

Usually an electrical problem occurs in three stages. The first stage is when conductors become exposed to elements such as moisture, chemicals, dust, vibration, or persistent overloading. It can also occur as a result of just normal wear and tear or deterioration. These elements cause the insulation to begin to deteriorate. At first there is not enough damage to be noticeable. Eventually, the damage will become significant enough to cause electrical faults. A relay can detect that there is a problem occurring because it can tell when there is any slight variation in current, resistance, temperature or voltage. Because changes like these are actually very small, only electrical devices that are as sensitive as a protective relay or a monitor will be able to detect them. A protective relay is designed to immediately notice any of these slight fluctuations. This can prevent any further damage from occurring.

When the electrical problem is allowed to become more severe, it can cause the insulation to breakdown, over voltage or overheating. Now the change is a lot more noticeable and traditional devices are also able to detect the problem and interrupt the power. Protection relays are often used for additional protection by being able to detect the contributor to the problem such as overheating or over voltage that most fuses and circuit breakers may miss.

When an electrical problem occurs and ends up causing any kind of damage, it is considered to be a stage 3 electrical problem. The benefit to using a protective relay is that they can detect problems in advance so that damage is reduced or eliminated altogether. Since they are more efficient at detecting changes, they are much better than some of the traditional devices.

There are some instances in business facilities or even homes where someone always has to reset circuit breakers, repair equipment or replacing fuses. But they don’t seem to be able to find the exact problem. In these cases, there is likely an over-current. In these cases, a protective relay which contains an over-current feature can be used. These types of protective relays work to measure currents, or inputs. The user can also set certain limits for the relay so that it is super sensitive and very precise. The settings in a protective relay are usually much more sensitive than what is found in circuit breakers or fuses. When the limits are exceeded, the relay operates an internal switch through the use of its relay contacts. The user can have this switch hooked up to any type of alerting device they choose. For instance, they may set the switch to turn on a light or an alarm when the over-current occurs. They may also choose to have the power turned off automatically if the limits are exceeded. This can be useful for preventing any type of larger problems or damage to equipment. These types of relays can also be very useful for helping to locate which piece of equipment is faulty. They are much faster and more accurate than other traditional devices.

There are a wide variety of protective relay types. They are typically used to monitor current, frequency or voltage. But there are also some different types that have highly specialized functions. The do not all monitor current or voltage. But they all have one thing in common and that is the ability to signal a closure so that a power switch can be activated. They can close a coil, breaker trip the coil or many other protective functions.