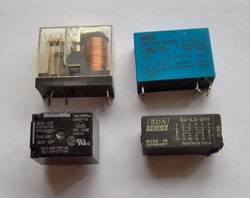 Types of Relays
Simply put, relays are electrically operated switches. Relays are electrical parts that send the messages that tell an electric or electronic device to start. Relays are necessary in millions of modern electrical devices because they are, in essence, the conduit between the switch and the parts of the device that make it run. In many electronic gadgets, it would take far too much power to start them up if it weren't for the relays that act as the go-betweens. These helpful little devices make it possible for cars, computers, and all manner of other electric devices and appliances to start without having the starters connected directly to the other mechanical parts, which would require an enormous amount of wiring and energy for startup. In addition, the safety hazards associated with all that wiring and extra energy needed to make these devices start would be immense, if not for relays. There are many different types of relays used in today's world of electronics, and the properties of each determine what type of relay is used in which device.

Machine tool relays are used in tools and other small machines that need switches to be turned on and off swiftly. Additionally, the moving parts of machine tool relays can be easily replaced. These come equipped with several contacts which makes them versatile for use in machine tools.

Solid state relays, or SSRs, unlike most relays, have no moving parts. It is this lack of moving parts that makes them more durable. SSRs are used in devices that require quick switching times. Today's solid state relays are capable of handling much higher levels of voltage than earlier versions of SSRs, making them a popular choice in today's electrical devices.

Frankly, without relays, nothing in modern society would work. Relays make it possible to start up electric and electronic gadgets and appliances such as refrigerators, cars, computers, cell phones, furnace fans, industrial equipment, conveyor belts, and more. The list of uses for relays is endless, and their usefulness is only growing. Today's modern conveniences are nothing without relays.