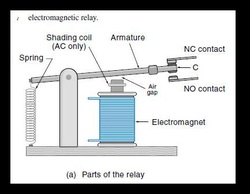 An electromechanical relay, put simply, is a switch. An electrically operated switch to be exact. Relays are electrical parts that are used when a low-power signal is needed in order to control a circuit, or when a number of circuits need to be controlled by one signal. There are several different types of electromechanical relays, and which type is used depends on the specific mechanical device it is used in. Some relays require an electromagnet, or a magnet in which a magnetic field is produced by electric current, with the magnetic field disappearing when the current is switched off. (Of course, an electric current is the flow of a charge of electricity.) A relay that can control higher powered devices, such as for an electric motor, is called a 'contactor.'

Relays were first developed back in the 1800s when it became necessary to use them for electrical protection. In the 1980s, static relays became the norm, and mechanical relays were being replaced by them. Static relays operated with analog circuitry and were considered more straightforward, as they had no moving parts. Digital relays are now replacing older types of relays. They are more accurate and reliable, since they use microprocessors that use numeric systems of counting, which are more exact. Electromechanical relays are considered the basis of electrical protection systems. Even though electromechanical relays are being replaced in some instances with microprocessors which are number-based devices, there still are a lot of relays in use today. The very first electromechanical relays were invented and used in circuits for long-distance telegraph as means of amplifying. These relays repeated the signal that came in from one circuit and then transmitted it on to a second circuit. Electromechanical relays were most commonly used in the first computers and also in telephone exchanges in order to perform logical computations and operations.

Relays are typically used when it is necessary to switch a small amount of power to a larger amount of power. Relays contain several electronic parts to make them work. These include an electromagnet, which controls opening and closing of the relay. Next is the armature, or the moving part, which is the electronic part that opens and closes. A spring is also used in a relay. This is the part that forces the relay back to its original position after each revolution. In addition, a set of electrical contacts is needed in order to transfer the power.

The point of a relay is to use a small amount of power to switch to a large amount of power. Relays typically are used in modern household appliances such as hair dryers, kitchen appliances, and lights that need to be switched on and off. They are also used in cars where things need to be turned off and on. In fact, modern car manufacturers are using relay panels in fuse boxes because they make maintenance simpler. There are a few things to think about when selecting relays for modern devices. First, you need to consider whether the contact will be normally closed (NC) or normally open (NO). Each of these situations will dictate which types of relays are needed and whether the device needs to be on all the time or needs to be toggled between the on and off positions. Another thing that must be considered is the maximum amount of voltage that the armature and its contact devices can handle. Finally, and perhaps the most important consideration, is the voltage and current that will be needed in the electronics project being undertaken because this will determine the armature activation.